The Centre for the Study of the Philosophy of Islamic Law at Al-Furqān, in partnership with the Maqasid Research & Studies Centre (Rabat), and the Faculty of Letters & Humanities - Department of Islamic Studies, Mohammed V University (Rabat) organised a training course titled “Objectives of the Noble Qurʾān”.

The training course was convened from the 28th to the 30th of May 2015, at the conference suite, Golden Tulip “Farah” Hotel in Rabat, Morocco, with the participation of around 120 scholars and researchers specialising in the area of maqāṣid, coming from Saudi Arabia, Lebanon, Egypt, Libya, Tunisia, Algeria, Mauritania, London, and different Moroccan cities. Lectures were delivered by a distinguished group of leading experts in the area of Islamic law (Sharīʿah).

The proceedings of the scientific course were launched on Thursday morning, 28 May, with a recitation of verses from the Noble Qurʾān. The inaugural session, chaired by Dr Jamal al-Saidi, was opened with a speech by Dr Saïd Amzazi, President of Mohammed V University, delivered on his behalf by Dr Hakima al-Khammar, the University’s Secretary General, welcoming the distinguished guests and delegates, and thanking all those who had contributed to organising the training course.

The speech emphasised the importance of these courses in adding depth to the understanding of maqāṣid, given that the maqāṣid articulated in the Noble Qurʾān are the most important, and indeed, the foundation of all others. He also highlighted the efforts of Mohammed V University in making resources available for this course, and the participation of researchers and specialists.

Subsequently, Dr Ahmed al-Raissouni, Director of the Maqasid Research & Studies Centre, gave a speech emphasising the organisers’ keenness to avoid a pressured and overloaded course programme in the quantity of presentations and papers, prioritising quality, and giving participants the time to pose their questions and engage in discussion.

This was followed by a speech delivered by Mr Sali Shahsivari, Managing Director of Al-Furqān Islamic Heritage Foundation, who thanked all those collaborating in organising the training course, as well as the lecturers, guests and participants, noting that the course co-incided with the 10th Anniversary of the establishment of the MaqasidCentre at Al-Furqān. He also indicated that this was the 10th training course organised by the Centre, pointing to a set of positive features relating to this course, such as its distinction in tackling the objectives of the Noble Qurʾān, as an extremely vital topic; the fact that the training course brought together a group of scholars representing eminent authorities in the area of maqāṣid from around the Islamic world; as well as the importance of the place where the course is taking place, Morocco, as one of the strongholds of maqāṣid. Mr Shahsivari also expressed his satisfaction with the three-way collaboration between Al-Furqān Foundation, the Maqasid Research & Studies Centre, and Mohamed V University in Rabat.

Dr Moulay Omar bin Hammad then spoke on behalf of the Organising Committee, explaining a number of administrative and methodological matters, and explaining the background and preparation for the course - spanning an entire year - with Al-Furqān Islamic Heritage Foundation; following the successful training course held in the city of Fez.

Dr Moulay Omar bin Hammad added that the objectives (maqāṣid) of the Noble Qurʾān cannot be captured by a single training course, but must be followed by further courses, to expand the material given. He welcomed the collaboration with Al-Furqān Islamic Heritage Foundation, and invited further research in this large workshop on maqāṣid, welcoming the attendance of all the experts, who had travelled from many countries.

The training course programme was divided into six morning and evening sessions, where the participants deliberated over 12 scientific presentations, and 23 reviews. The sessions included material additions, notes, and discussions. The training course concluded with a scientific seminar and a final session.

The title of the first scientific session was “Concepts and introductions” (al-mafāhīm wa al-madākhil), chaired by Dr Mohammad Salim al-Awwa. The first presentation was titled “Selected maqāṣid of Qurʾān: towards a knowledge and methodological perspective”, presented by Dr Nour al-Din al-Khadimi. In his presentation, he revealed and explained the purposes of the different levels of maqāṣid knowledge in the Qurʾān, including “negating the apparent that hides the meaning” (nafy al-ẓāhir al-ḥājib li al-maʿnā), while emphasising the need to consider the aims (al-ghāyāt), proposing that worship through aims (al-taʿabud bi al-ghāyāt) is equivalent to worship through the apparent (al-taʿabud bi al-ẓāhir). He also signposted a set of rules that confirm the principle of “outcomes of actions” (maʾālāt al-afʿāl). The lecture was followed by two critical reviews: the first by Dr Mohammed al-Qajwi, who provided a general commentary, pointing out the importance of rule-setting. Subsequently, Dr Omar Jadiyah commented on this intervention, and spoke in his paper on the benefit of the legal admissibility of Qurʾānic maqāṣid, highlighting some examples of maqāṣid, and finally, speaking on the harmony of the Qurʾān, from methodology to functionality.

The second presentation was titled “From clear promulgation to legal maqāṣid”, presented by Dr Ahmed al-Raissouni, on behalf of Dr Muhsin Abdul Hameed. Dr al-Raissouni recounted the major ideas of the article, revolving around three circles of understanding Sharī‘ah texts on the path to adoption of a holistic perspective, and hence, going beyond the piecemeal approach to jurisprudence (Fiqh). He highlighted the negative effect of partial jurisprudence in marring the features of the Noble Sharī‘ah, considering that Muslims’ abandonment of Islamic legislation in favour of European legislation was caused by the narrow-minded partial jurisprudence. Hence, the author emphasised the necessity for adopting a comprehensive understanding that starts with promulgation and ends at maqāṣid, in achieving a more ideal understanding of God’s Noble Names.

Dr al-Raissouni, in turn, commented on the intervention by Dr Muhsin Abdul Hameed, explaining that the “apparent” here signified the opposite of “beyond the apparent”, mentioning the saying of Ibn al-ʿArabī: “and following the apparent at face value demolishes the Sharīʿah”. Dr al-Raissouni explained that the abandonment of juristic legislation by Muslims was caused by European colonialism, which had imposed its laws by force. Subsequently, Dr Abdul-Majeed al-Najjar commented, reiterating the importance of Qurʾānic maqāṣid.

Following the end of interventions and comments, the floor was opened for discussion with the objective of facilitating deeper understanding of the topics and matters raised in the presentations; most prominently, the invitation by Dr Nour al-Din al-Khadimi relating to the necessity to dedicate effort to a maqāṣid project in order to form and qualify the Shāṭibī of the era. On the other hand, Dr Abdul-Majeed al-Najjar emphasised the practical dimension of maqāṣid, and hence, stimulating maqāṣid in minds, and then reality, presenting a proposal for a seminar on the topic: “Maqāṣid stimulation”.

The title of the second session was “The maqāṣid of Qurʾān and exegesis”, chaired by Dr Hassan Jaber. This started with a presentation by Dr Aminah Saadi, titled: “Maqāṣid of Qurʾān through al-Taḥrīr wa al-Tanwīr”, where she pondered over the most important methodological rules that structure the path of the scholar of exegesis in clarifying the intent of the Qurʾān, focusing on the rules and techniques of causation (taʿlīl) from the perspective of IbnʿĀshūrin his work of exegesis. This paper was reviewed and commented upon by both Dr Ahmad al-Ghizaywi and Dr Ahmad al-Umrani. It was followed by a presentation by Dr Ahmad Kafi, titled “Qurʾānic maqāṣid from the perspective of al-Shāṭibī andʿAlāl al-Fāsī”. In the paper, the author compared a set of Qurʾānic maqāṣid from the perspective of both scholars. This was reviewed and commented upon by both Dr al-Arabi Busalham and Dr Abdul-Rahman al-Adrawi, followed by a set of discussions providing greater depth to the subject matter of the interventions.

The third session, in the morning of Friday, 29 May, was titled “Maqāṣid of Qurʾān and guiding exegesis”, chaired by Dr Nour al-Din al-Khadimi. The first presentation of the session was delivered by Dr Faridah Zumurrud, titled “Maqāṣid of Qurʾān and their effects on the work of scholars of exegesis”, where she attempted to illustrate the concept of maqāṣid of Qurʾān by referencing the introduction to the books of exegesis by al-Baghawī and Ibn Jazī, and extracting some of these maqāṣid from other works, namely Tafsīr al-Manār, and Tafsīr al-Taḥrīr wa al-Tanwīr, within the scope of establishing a maqāṣid law to be used in exegesis. Comments on this presentation were provided by Dr Abdul-Kabir al-Hamidi and Dr Idris Awhana, where the focus was on the problem inherent in the concept of maqāṣid of Qurʾān.

The second presentation was given by Dr Moulay Omar bin Hammad, titled “Maqāṣid of Qurʾān and the principles of exegesis”, in which he pondered over the importance of exegesis principles, and clarified the relationship with maqāṣid of Qurʾān, as well as the problem relating to the lack of maturity of such scientific studies. Comments were then offered by Dr Saleh Zarah and Dr Ahmad al-Bukili. The session concluded with a set of discussions, and questions and answers.

The fourth scientific session was titled “Maqāṣid of Qurʾān and different applications”, which began with a presentation titled “Maqāṣid of parables in the Noble Qurʾān” by Dr Ibrahim al-Bayoumi Ghanem, who called attention to the necessity of establishing rules for research within the sanctity of the text without fear or negligence. It was commented upon by both Dr Mohammed Salim al-Awwa and Dr Abdul-Hamid Ashaq.

This was followed by a talk by Dr Muhammad Ahmin on the topic “Maqāṣid of wealth in the Qurʾān”, revealing the objectives (maqāṣid) inherent in the creation of the means of wealth, as taken from the Qurʾān, and the objectives underlying the uses of such wealth. This was commented upon by both Shaykh Salim al-Sheikhy and Dr Farid Amar, after which the proceedings of the second day were concluded with a general discussion.

The fifth scientific session, on the morning of Saturday, 30 May was titled “The horizons of maqāṣid of the Noble Qurʾān”, chaired by Dr Ahmad Abu Zayd, where the first intervention was by Dr Wasfi Ashur Abu Zayd, titled “Maqāṣidī exegesis of the Qurʾān: a foundational perspective”, attempting in his paper to lay the foundation for a Qurʾānmaqāṣid project, by revealing some of its techniques, rules, and processes. This was commented upon by Dr Ahmad Nasri and Dr Muhammad al-Rabiah, and was followed by the 10th presentation “Maqāṣidal-Qurʾān and the challenge to the human being to be what he is” by Dr Hassan Jaber, where he extracted the higher Qurʾānicmaqāṣid founded on the innate (fiṭrah), God’s dye (al-sibghah), and pure monotheism (al-ḥanīfiyyah). The presentation was commented upon by Dr Ibrahim al-Bayoumi Ghanem and Dr Zaynab Abu Ali.

The last of the presentations of this session was delivered by Dr Mohammed Awwam, titled “The objective of reforming human thinking”, in an attempt to extract the maqāṣid aimed at reforming the intellect in the Qurʾān. This was critically reviewed by Dr Ibrahim Bourshashin, whereupon the session was enriched by the discussion from the floor.

The scientific sessions were concluded with a seminar, chaired by Dr Nour al-Din al-Khadimi, with the participation of Dr Ahmad Abu Zayd, who indicated the need to pay attention to the objectives of Qurʾānic verses and chapters. He was followed by Dr Ahmed al-Raissouni, who hinted at the need to follow the methodology of wider consideration in pondering over the Qurʾānic meanings and delving into the profound depth of its universal concepts, emphasising the necessity of applying maqāṣid to all Islamic sciences. 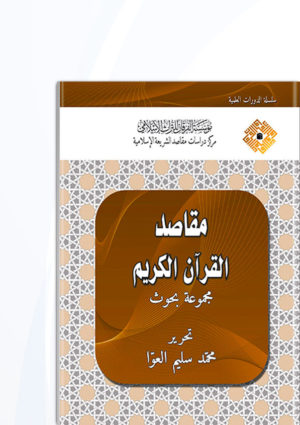 Objectives of the Noble Qurʾān

Objectives (Maqāṣid) of the Noble Qurʾān (2)

Objectives (Maqāṣid) of the Noble Qurʾān (3)