This article deals with the literary manuscripts amassed in the library of al- Baghdādī, the owner of this library, ʿAbd al-Qādir b. ʿUmar al-Baghdādī (1030/1621—1093/1682), and his book Khizānat al-adab wa-lubb lubab lisān al-ʿarab (The Literary Library and the Quintessence of the Arabic Language).

Al-Baghdādī is important because he is a relatively recent scholar, being a lawyer of the eleventh century of the hijrah. His library was packed with numerous manuscripts, including a vast number of literary works, which he listed in the introduction to his book, Al-Khizānah. By the word literary I mean those works connected with literature as opposed to the sciences.

It is also natural that this article be restricted to unpublished manuscripts which are dispersed throughout the world’s public and private libraries, and omit those which have been lost, or are at least deemed irrecoverable.

Al-Baghdādī amassed an immense library. He tells us about several of its contents when he mentions some of his sources in the introduction to this precious book. He also wrote repeatedly, whenever the situation required, about his possession or reading of one book or another. For his unique book, Allāh provided a correspondingly distinguished editor, Professor ʿAbd al- Salām Hārῡn who has devoted great care to its edition. The book was also blessed with a tireless publisher, Muḥammad al-Khudarī, who produced it immaculately in thirteen volumes and indices.

Professor Hārῡn tells us in his introduction that in 1050/1640, at the age of twenty, al-Baghdādī emigrated to Egypt. There, he met Shihāb al-Dīn al- Khafājī (d. 1069/1659), who, besides being the author of Rayhānat al-alibbah, possessed a large library.

The library of Shihāb had an exceptionally beneficial influence on al-Baghdādī. Both by virtue of their association, and, following the death of Shihāb in 1069 AH, by al-Baghdādīʾs acquisition of the majority of its contents. This fact was mentioned by al-Muḥibbī in Khulāṣat al-athār (part II, p. 452): ‘When Shihāb died, al-Baghdādī inherited most of his books, and went on to acquire many more. Some of those I have met told me that he possessed a thousand books of collections of the poetry of ethnic Arabs.’   We can see from the above account that the inventory of al-Baghdādīʾs library was astonishing and awe- inspiring, for its contents included rare categories and wonderful writings.

Despite the possibility of exaggeration in. al-Muḥibbī's account, it nevertheless provides us with an idea of the large extent of this library, and of the rare books and poetry collections it contained. It is interesting to read in al-Baghdādīʾs introduction, in the chapter entitled 'the second matter in noting the material upon which we have relied, and from which we have selected, that are of many types and belong to many fields', that he lists in about ten pages the most important sources, although not all, to which he referred.

What, then, was the fate of this huge library, of a portion of which al- Baghdādī has informed us? In his introductory preface to Khizānat al-adab, Professor ʿAbd al-Salām Hārῡn counted 945 source references named by al- Baghdādī in his own introduction. He wrote: ‘If we add to these books commentaries on them, abridgements, and critiques, we would have over 4,000 books, many of which have been lost or perished.’

I hope I am correct in my assumption that the majority of those books are works of literature and linguistics (connected with the problems of grammar and their explication), and biographies of the poets who were the sources of these problems. That this is so is evident from the care al-Baghdādī paid to the literary section of his library, his detectable satisfaction whenever this field was discussed and his apparent inclination to indulge his interest in it.

Although time has scattered this great library, researchers have managed to find a number of its lost books, which have travelled the four comers of the world. Professor Harῡn mentions some of these books from al- Baghdādīʾs library. He found a copy of Farḥat al-adīb by Abῡ Muḥammad al-ʿArābī al-Fundijābī, kept in the Egyptian National Library, which al- Baghdādī had copied for himself, although there was no mention of the owner of the original book from which the copy was made. In the same place he wrote that Professor ʿAbd al-ʿAzīz al-Maymanī mentioned that a copy of Majmaʿ al-amthāl by al-Maydanī preserved in the Bankipore Library in India contains a note in al-Baghdādīʾs own handwriting indicating that it had once belonged to him. A similar note was also found al-Sijistānī’s Al-Muʾammarῡn, which was later printed in Leiden from this original; and on the same author’s Al-Wasāyā. There is a copy of Sharḥ Shawāhid Sharḥ al-Shafīʾah with a whole section in al-Baghdādī’s handwriting.

The following information can be derived from al-Baghdādīʾs introduction. He collected in his library the writings of virtually every distinguished well-known scholar and man of letters. He acquired almost all their works, especially in the field of grammar. He amassed a large number of explanations of grammatical problems: the value of these works is well known to every specialist in literature and poetry for the valuable texts, biographies, and historical information they contain. Almost equal in comprehensiveness is the collection of explanations of verses with ambiguous etymologies, which possesses the same value for researchers in literary history. He also assembled a large number of complete collections of poetry which he lists on three pages; it is natural for researchers to marvel at how such a large collection came into his hands after a period of more than a millennium, and to wonder about its fate. He possessed various collections of books on a number of rare Arabic linguistic matters and literary forms. The attention is especially drawn to his mention of the books of aghlāṭ al-naḥwīyīn (the errors of the grammarians), which is an important area of scholarship. Al-Baghdādī listed them in one sentence, as though he had assembled their volumes together on a separate shelf in his library.

Despite the dispersal suffered by al-Baghdādīʾs library, as well as the libraries of many comparably famous scholars of the same period, we must not forget a positive and reassuring aspect. The libraries of Istanbul have preserved many precious books, including one which had belonged to the influential vazir al-Kubrilī (Aḥmad Pāshā b. Muḥammad Köprῡlῡzādah, d. 1086/1675). His effect on al-Baghdādī should not be overlooked. Following al-Baghdādīʾs contact, the vazir was generous and open towards him. Their mutual passion for science, literature, and books brought the two men together, and there is no doubt that al-Baghdādī benefited as much from his friend Köprῡlῡzādah’s library as he had done from the library of his mentor al-Khafājī. Although I have no details of the extent of this benefit, it is highly probable that, because of his appetite for books, al- Baghdādī must have copied many of its volumes.

Al-Baghdādī's list of sources provides us with ample evidence that be cherished the writings of Abῡ ʿAlī al-Fārisī (al-Ḥasan b. Aḥmad, d. 377/987), and his disciple Ibn Jinn (d. 392/1002); and that he collected their complete works. The seriousness of the loss of the works of these two authors is amply illustrated in the case of Al-Tadhkirah al-qaṣfiyyah, which, as we learn from al-Ziriklī's account, consisted of twenty volumes, and was a book on Arabic linguistics. The fate of this important composition remains unknown to this day, although it had clearly been in al-Baghdādī's library. The list of literary manuscripts in al-Baghdādī's library follows in Arabic. I have confined myself to listing only those manuscripts which have until now remained unedited or unpublished. 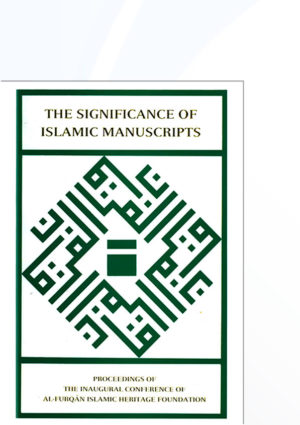 The Significance of Islamic Manuscripts