SALĀH AL-DĪN HASAN NAKHJAWĀNĪ known as Bulghārī, was one of the most distinguished Sufi masters of the Suhrawardiyya order during the 7th/ 13th century. At the request of a number of the Shaykh’s disciples, Muhammad Zaynī or Zaynabī, a close companion of the Shaykh, compiled his master’s life scenes, as well as his spiritual states (ahwāl) and utterances - which occasionally bear resemblance to shariyāt (‘ecstatic expressions’) - in a work entitled Maqāmāt (‘The [Mystical] Stations’). The manuscript of this work, preserved in the Institute of Oriental Studies and Manuscripts in Tajikistan (MS no. 4036), is actually the most important key source of Shaykh Hasan’s life. The article in Danishnāmah-yi jabān-i Islām, under Bulghārī Nakh- jawānī, is based only on later sources, like Rawzāt al-Jannāt by Ibn Karbalaī and Rashahāt ’ayn al-hayāt by Wā’ez Kāshifī, as well as some scattered researches of ‘Abbās Iqbāl Ashtiyānī. In addition, some pages are missing in this manuscript.

While referring to the various titles (alqāb) of the Shaykh which prove his high status in both sharī’a (formal Law) and tarīqa (spiritual path), the author of Maqāmāt states that these collected sayings are based on what he had heard from the Shaykh as well as on some of his words recorded by a number of his other significant disciples. Among them was Shaykh Najm al-Dīn, whom the author of Maqāmāt describes as the Shaykh’s “scribe of occurrences” (kātib-i wâqi’āt) (folio 74a). Maqāmāt is divided into three parts: the Shaykh’s life and spiritual states, his correspondence and the explanation of the occurrences (sharh-i wāqi’āt). The author explicitly states that the contents of the last two parts are the words of the Shaykh himself (folios 11a, b). The paternal grandfather of the Shaykh, known as Shaykh Salmān, was also a Sufi, whose tomb is in Hamadān, but, Khwāja ‘Umar Birinj Furūsh (‘The Rice Merchant’), the Shaykh’s father - as his title shows - was involved in commercial activities. It appears that his family migrated to Nakhjawān, where Hasan was born. Hasan was 11 years old when, along with his father and brother, Husayn (folio 49b), moved to Khuy with the intention to continue his education in high school (dabīristān) (folios 12a, b). As can be surmised irom some scattered indications of the Shaykh, for a short period and apparently due to Khwaja ‘Umar’s death, he had suffered from indigence (folio 12b, 13a). At the age of 23, Hasan was captured by the Mongols and spent 7 years among them, but apparently was in captivity only for 3 years, and for the remaining 7 years he was busy with trade and could earn some money (folios 13b; 14a; 20a). His title as mard-i lashkargāh (‘Man of Military Camp’) or lashkarī (‘the Military’) (folio 48a, 49b), is probably related to the same period of his life. It also appears that Hasan’s life as a Sufi began in this same interval. It is explicitly suggested by the Maqāmāt that after those 7 years and being inspired by “a beloved one whose appearance was strikingly like that of his fatherˮ, Hasan headed toward Darband of Baku. Afterwards, he made up his mind to move to Bulghār but a certain ‘call’ prevented him from travelling. Considering the facts that the Shaykh had once said that from that day, “when he was honored through a Jadhba (‘attraction by God’)”, his life span, like that of the Prophet Muhammad, would be 63 years, in the end his death occurred in 698/1298-1299 (at the age of 93). meaning the Jadhba should have occurred in the year 635/1237-1238. As it may be, Hasan, along with a caravan including some people from Ālān, moved to Arūs. During the journey, the Shāfi’is of the caravan regarded him as their leader (folios 20a, b; 21a, b). Afterwards he went to Bulghār where he began to spread spiritual guidance and found a number of significant disciples, among them being Shaykh ‘Uthmān Fuqqā’ī, renowned for his lofty spiritual status and his numerous ‘acts of grace’ (karāmāt). After 9 years of offering guidance and travelling in Arūs and Bulghār (folios 24b, 25b), the Shaykh moved to Bukhārā where he was called the ‘Shaykh of Bulghar’ (folio 25b). As suggested by the Maqāmāt, after a few years (taking into account some historical facts probably more than 4 years), the Shaykh desired to return to Bulghār and left Bukhara for Bulghār. After 3 years, the Shaykh returned to Bukhārā and lived there for 20 years (folio 65a).

During the Shaykh's accommodation in Bukhārā, Barka Khān, the Mongol Muslim ruler of the Western Qibchāq (r. 655-664/1257-1266), became one of the people who held the Shaykh in high esteem and invited him to Qibchāq and said that if the Shaykh was unable to come, he could pay a visit to him in Bukhārā. The Shaykh did not go to Qibchāq, but by sending some meaningful and dervish-like gifts to Barka Khān, he tried to tell him that Sartāq, his nephew and rival, would die and Barka Khān would come to the throne (folio 29a). During the conflicts between the Mongol families in the second half of the 7th/13th century, Bukhārā was invaded and occupied many times. As indicated in the Maqāmāt, since the Shaykh expected the turmoil, he ordered a number of his companions to move to Khurāsān, although a few of them including Khwāja Akbar, the Shaykh's son, were killed during one of the Mongol invasions in Khurāsān. At that time Shaykh Hasan was staying in the Umayyad stronghold of Bukhārā and when the Mongols invaded the city, he spread his protecting veil over the people and brought them to his stronghold, but, after the destruction of the city (probably by the forces of Abāqā Khān in 671/1272), the Shaykh moved to Khurāsān. He ordered some of his disciples to stay in Nayshābūr and he travelled to Kirmān. On his way, the Shaykh left some of his disciples in different cities and along with two of his companions arrived in Kirmān where he resided at the Jāmi’ (‘Congregational Mosque’) of the city (folios 65b, 66a, b). It is said that the Qutlugh Tarkān Khātūn, the Qarākhatāī ruler of Kirmān (r. 655-681/1257-1282), who did not believe in the Sufi Shaykhs of Kirmān, after seeing the movements and gestures of Shaykh Hasan and hearing his words, became one of the people who held him in high esteem (folios 66b, 67b) and instructed the building of a khānaqāh (‘Sufi cloister’) for him and endowed a village to this khānaqāh (folios 67b, 68a). The Shaykh lived in Kirmān for 27 years. During this period, he traveled to Shabānkārah, and Shiraz, where he was warmly accepted, especially by the Sufi Shaykhs of those regions (folio 72a). After- wards, from Shiraz, he passed through Māhīrūyān and Shūshtar and arrived in Basra where he stayed for two months. During his stay in Basra, Kamāl al-Dīn Hamadāni, the Shaykh of the Khanaqāh or Junayd Baghdādī passed away. The companions of Shaykh Hasan asked him to move to Baghdad with the intention of succeeding the late Kamāl al-Dīn, but the Sahykh did not accept (folios 73b, 74a) and returned to Kirmān. During his last years, Shaykh Hasan, travelled to Tabrīz; a journey which was actually like a hijra (‘migration’). The author of Maqāmāt has related an account which bears resemblance to an ‘act of grace’ (karāmāt) and shows a likening of the Shaykh to the Prophet Muhammad. It is said that in 12 Safar 695/ 21 December 1295, through a dream-vision, the Shaykh realised that he would die within the next three years. He summoned his disciples and informed them that 63 years after being honoured through the Jadhba (‘attraction by God’), although not during the month of Safar, but during that or Rabī’i, he would die. Afterwards he headed toward Tabrīz to visit his companions and disciples and told them that he would travel to Marāgha where he would desire to die and be buried next to Shams al-Dīn Marāghī in order to accompany him in the voyage or death, as Shams al-Dīn had accompanied him during his illness (see folio 75b). However, his companions and disciples prevented him from travelling and the Shaykh passed away, on the evening of Monday, 22nd Rabī’ I 698/28th, December 1298. He was buried in the cemetery of the Surkhāb district of Tabrīz (folios 75a, b; 76a, b; cf. folio 17b, referring to his date of death in 2nd Rabī’ I/8th December). The author of the Maqāmāt refers to the Shaykh’s sons, namely ‘Imād al-Dīn Masoūd, Fakhr al-Dīn Hasan and Khwāja Akbar, the latter having been killed at the hands of the Mongols (folio 18a). Considering his life span (93 years) and the date of his death, as mentioned in the Maqāmāt, his birth should have been in the year 605/1208 or 1209.

Shaykh Hasan whose spiritual lineage goes back to Shaykh Abū al-Najīb Suhrawardī, was the disciple of many renowned Sufi masters but his Shaykh al-Shuyūkh (Great Shaykh, Master of Masters) and his qutb (‘Pole’) was Shaykh Shams al-Dīn Rāzī who had received his khirqa (‘cloak’, ‘Sufi robe’) from Sahykh Hosain al-Saqqā and the latter received his initiation from Suhrawardī himself (folio 60a). Apart from 28 great Sufi Shaykhs, such as Shaykh Sa’d al-Dīn Hamawī, Shaykh Shams Dīn Marāghī, Khwāja ‘Abd al-Rahīm Tabrīzī (known as ‘Mutikallim’), and Khwāja Awliyā’ Gharīb, who offered guidance to Hasan, he had also benefited from the companion of Sufi masters like Shaykh Rūh al-Dīn (the khalīfa, ‘vicegerent’, of Shaykh ‘Abd Allāh Khafīf), Sadr al-Dīn Rūzbihān, Khwāja Najīb al-Dīn Barghash as well as Shaykh Sayf al-Dīn Bākharzī, the renowned Sufi and scholar and a distinguished khalīfa of Shaykh Najm al-Dīn Kubrā. In a Sufi gathering, Shaykh Hasan, as the defender of a teaching by Shaykh Sa’d al-Dīn Hamawī stating that: “The last step of the nabī is the first step of the walī", discussed with Shaykh Sayf al-Dīn Bakharzī and interpreted this statement as the journey of the anbiyā’ (‘prophets’) from ‘the inward’ (bātin) to ‘the outward’ (zāhir) and the contemplative voyage of the awliyā’ (‘friends of God’, ‘saints’) from the ‘outward’ to ‘the inward’ (foilios 27b, 28a, 46a- 47a, 48a-49b, 50a, 60a-63b, 72b, 73a). Considering the Shaykh's indications as regards his meetings with some of the mentioned Sufis in Tabrīz, it can be surmised that many years before his last journey which ended with his death (see above), he had travelled to Tabrīz (e.g. folios 5a, b; 47b). Prominent among his disciples and vicegerents were Badr al-Dīn Maydānī who under the order of the Sahykh, moved to Bukhārā where he began to spread his spiritual guidance and teachings and gained a high reputation; Mawlānā Shams al-Dīn Tall ‘Aliyānī, who was the administrator of Shaykh Hasan’s companions and also Mawlānā Sirāj al-Dīn ‘Attār (folios 18a, b; 64a, b).

Apart from some invaluable information on the life, traits and spiritual states of Shaykh Hasan, the Maqāmāt provides some important facts about a number of Sufi masters that may be helpful in resolving some queries concerning them. This work, while mentioning some important historical events in Transoxania, Khurāsān and Kirmān, has shed light on vague scenes in the history of Transoxania, during the chaotic time of conflicts between the Mongol emirs at the beginning of the Mongol invasion, under Hulākū Khan and throughout the Ilkhānid period as well as the events of Kirmān, during the rule of Tarkān Khātūn. 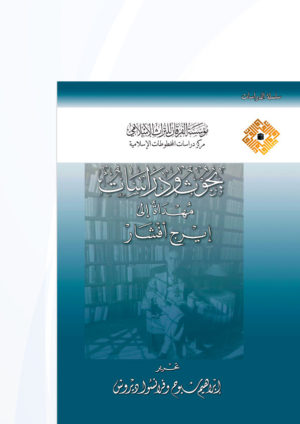 Research Articles and Studies in honour of Iraj Afshar